Within just a few minutes, an EF3 tornado, with winds up to 130 miles per hour, damaged 50 of Jacksonville State University’s (JSU) 70 campus buildings. The school’s beloved Alumni House, built in 1839, was so badly damaged it had to be demolished. Hugh Merrill Hall, which houses the School of Business and Industry, was also a total loss. Pete Mathews Coliseum, home of JSU’s basketball team, will cost $6 million to repair. Wallace Hall, which houses the School of Health Professions and Wellness, was also a total loss and will need to be replaced. Additionally, Houston Cole Library, Logan Hall, Mason Hall, Martin Hall, Brewer Hall, and many more all will require major renovations. 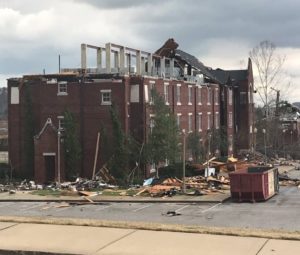 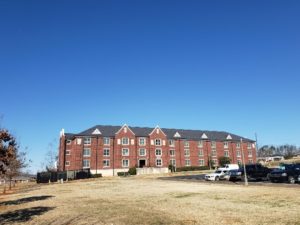 (Left) JSU’s Logan Hall before and after post-tornado restoration.

The news hit IEM Disaster Resilience and Recovery Manager Royce Woodruff especially hard. JSU was a second home to him. He received a bachelor’s degree, a master’s in public administration, and a Doctor of Science degree in emergency management there. He serves on JSU’s Alumni Board of Governors and has maintained a close affiliation with the school for the last 28 years. In fact, he even wrote the school’s hazard mitigation plan in 2009.

At the time of the catastrophe, Woodruff was working on a Hurricane Harvey recovery project for IEM in Houston. He called his friends in JSU’s administration as soon as he learned of the disaster on the news, volunteering to do anything he could to help. They wanted Woodruff to get over to the school as soon as possible to get the ball rolling on the long-term recovery effort. He arrived on campus in mid-May.

“At that point, there had been very little debris removal and it looked like a war zone,” stated Woodruff. “There was debris everywhere, including large pieces of lumber, bricks, glass, and shingles torn off buildings as well as furniture, tree limbs, and books. I even saw 2 x 4s driven into the sides of buildings like spikes by the force of the wind. I had tears in my eyes. It was like somebody had broken into and torn apart the home I grew up in.”

Woodruff immediately put his knowledge and contacts to good use. The first thing he did was to get the right people to the table from JSU, FEMA, and the state to create a path forward. Together, they established a work plan, with clear roles and responsibilities for each of the parties involved. Within 96 hours of that meeting, debris removal began.

Woodruff had firm backing from IEM’s leadership. He consulted closely with Bryan Koon, who served as director of the Florida Division of Emergency Management from 2011 to 2017 before joining IEM as Vice President of International Homeland Security and Emergency Management. He said, “Royce, whatever it is you need to get done, just go ahead and do it, and I’m here to help if you need it.”

JSU was able to fund its massive restoration effort using a grant from FEMA’s Public Assistance (PA) program—a program that can cover 75 percent of recovery costs for affected jurisdictions. The state, known as the grantee under the program, covered 12.5 percent, and the subgrantee, JSU, covered the last 12.5 percent. In all, project costs were estimated at $120 million.

Woodruff and his IEM team quickly got about the business of performing all the tasks required in the PA disaster recovery process. The first task was to perform damage assessments. The program requires that the subgrantee identify in detail the damage suffered as well as the recovery costs. The team then used that information to develop Project Worksheets that are closely reviewed by both the state and FEMA.

JSU was lucky to have an active alumnus who is a pro in this highly specialized area. Applying his years of professional experience, Woodruff knew exactly how to develop Project Worksheets that accurately and convincingly tally repair costs and make a case for the importance of repair projects in terms of the school’s resiliency—the ability to build back better to withstand future disasters.

The second component, grant management, is another specialty at which Woodruff is an old hand. This involved managing the debris cleanup and construction contractors hired through the PA grant. A large number of very basic things had to be rebuilt, such as school signage, emergency call boxes, bus shelters, and light poles. In addition, many roofs required extensive repair. In fact, the 50 affected facilities all had to have their roofs replaced.

Some tasks were more complicated. For instance, the Houston Cole Library—the tallest structure on campus—was blown 6 degrees off center by the high winds. It was returned to its original location but required careful inspection by structural engineers to ensure its integrity. In addition, the library suffered extensive damage. The roof had to be completely replaced as did all the facility’s mechanical components, including the HVAC system, elevators, and stairwells, at a cost of more than $6 million.

Building back better was always on Woodruff’s mind and he made it integral to the university’s recovery effort. Known as “hazard mitigation,” repairing or replacing damaged buildings to better withstand future events is a basic tenant of FEMA-funded recovery projects. At JSU, crews buried telecommunication lines and retrofitted buildings with impact-resistant glass to withstand 150 mph winds or more and roofs were reinforced to sustain higher winds as well. More than 90 percent of all permanent work performed at JSU included mitigation features.

The final stage of the project entails closing out the construction work, providing the state and FEMA with proof of payment for each project, and ensuring all projects are completed within the agreed upon period of performance and are in compliance with the state and FEMA rules and regulations.

In the end, JSU will have a fully restored and more storm-resistant campus, and Woodruff hopes it will be used as a model for recovery efforts elsewhere.

Woodruff felt extremely fortunate to be able to support his alma mater, which set a strong foundation for his career. “My JSU education has been instrumental in my professional development, so I am glad to have a chance to give back like this,” stated Woodruff. “Not only is JSU going to fully recover, but it will be a better prepared and more disaster-resilient institution for any future events and I was very happy to help them achieve that.”