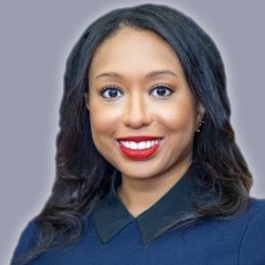 Gisele Roget joined IEM as a Senior Advisory in April 2021. She is the Founding Principal of Overbrook Square Group, a Washington, D.C.-based advisory firm focused on the housing and financial services sectors.  Overbrook Square Group is committed to advancing policies that empower individuals and communities to build and accumulate wealth. This commitment is rooted in Gisele’s heritage as the daughter of an immigrant father and a mother descended from South Carolina sharecroppers.

For over fifteen years, Gisele has held influential roles in the public and private sectors leading teams and directing policy at the National Credit Union Administration, Federal Housing Administration, MetLife and Congress.  In 2019, Women in Housing & Finance recognized Gisele’s accomplishments with the prestigious “WHF 40 under 40” award.

Gisele was the first Black woman to serve as Deputy Chief of Staff and Director of the Office of External Affairs and Communications for the National Credit Union Administration (NCUA).  Gisele’s achievements at NCUA included the launch of ACCESS, the agency’s financial inclusion initiative and rulemaking to expand financial services to underserved communities.  Gisele secured key legislative victories in the landmark CARES Act of 2020 that resulted in an additional $20 billion in reserve liquidity and regulatory relief for the credit union system. Gisele served as the NCUA Chairman’s representative on the Financial Stability Oversight Council Deputies Committee.

Gisele led the Office of Single-Family Housing of the Federal Housing Administration (FHA) where she oversaw wide-ranging policy changes that encouraged greater consumer choice and reduced regulatory burden in the $1.2 trillion program for low- and moderate-income homebuyers.  Gisele successfully worked with Congress to secure over $40 million in multi-year funding in 2018 and 2019 for FHA Catalyst, an initiative to improve outdated FHA I.T. systems. She expanded homeownership opportunities by finalizing the 2019 Condominium Rule. Gisele represented the FHA as a panelist at over fifteen mortgage industry conferences held by the Mortgage Bankers Association, Federal Reserve and other organizations.

Earlier in her career, Gisele held roles at MetLife Inc. and at the U.S. House Committee on Financial Services.  On behalf of MetLife, Gisele successfully lobbied for the enactment of the Insurance Capital Standards Clarification Act of 2014, the first substantive amendment to the Dodd-Frank Act. Between 2015-2017, Gisele was responsible for championing bills reported favorably by the U.S. House of Representatives, the Senate Banking Committee and the Senate Appropriations Committee.  During her tenure on the Professional Staff of the Financial Services Committee, Gisele drafted mortgage provisions enacted in the Housing and Economic Recovery Act of 2008 and the Dodd-Frank Wall Street Reform and Consumer Protection Act of 2010.

Gisele graduated from Yale University with a B.A. in History.