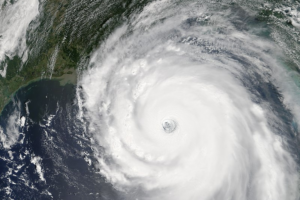 Louisiana and the Gulf Coast are once again in the crosshairs of a hurricane as we observe the 16th anniversary of Hurricane Katrina. Our thoughts and prayers are with the people and communities of Louisiana, Mississippi, Texas, and others inland who might be impacted by Hurricane Ida over the next several days.

Hurricane Katrina affected more than a half million people within nearly 90,000 square miles across Louisiana, Mississippi, and Alabama. The August 2005 storm resulted in over 1,600 deaths, record damage to housing and infrastructure, and generated one of the largest disaster relief and recovery operations in U.S. history.

Hurricane Katrina served as an impetus in changing the way the nation manages disasters.

An after-action report drawn up by then President George W. Bush’s administration listed mission-critical challenges presented by the hurricane. Challenges identified include but are not limited to: national preparedness; integrated use of military capabilities; communications; environmental hazards; and training and exercises, homeland security professional development and education.

A BREAKDOWN OF POST-KATRINA LESSONS LEARNED

In accord with the National Incident Management System (NIMS) and the National Response Plan (NRP), federal and state and territorial agencies build their command and coordination structures to support the local command and coordination structures during an emergency. When Katrina struck, this framework did not address the conditions of a catastrophic event with large scale competing needs, insufficient resources, and the absence of functioning local governments. These limitations proved to be major inhibitors to the effective marshalling of federal, state, and local resources to respond to Katrina.

Following Katrina, the Departments of Homeland Security (DHS) and Department of Defense (DOD) were recommended to jointly plan for DOD’s support of federal response activities as well as those extraordinary circumstances when it is appropriate for DOD to take a leading role in a federal response. Also, the storm raised the issue that the National Guard should focus on increased integration with active duty forces for homeland security plans and activities.

DHS was tasked with reviewing current laws, policies, plans, and strategies relevant to communications. Upon the conclusion of this review, the Homeland Security Council, with support from the Office of Science and Technology Policy, developed a National Emergency Communications Strategy that supports communications operability and interoperability across emergencies, disasters, and in steady state.

Programs were established for the development and maintenance of mass evacuation plans, including how to execute such plans when disasters overwhelm or incapacitate state and local governments.

DHS, in coordination with state and local governments and the private sector, was appointed to develop a modern, flexible, and transparent logistics system. This system would be based on established contracts for stockpiling commodities at the local level for emergencies and the provision of goods and services during emergencies. A main after-action item identified was that the federal government must develop the capacity to conduct large-scale logistical operations that supplement and, if necessary, replace state and local logistical systems by leveraging resources from both the public and the private sectors.

The U.S. Department of Health and Human Services was asked to coordinate with other U.S. Departments, as well as state governments and non-governmental organizations, to develop a robust, comprehensive, and integrated system to deliver human services during disasters so that disaster survivors are able to receive assistance in a simple and seamless manner. This system was designed to be a consumer-oriented, simple, and effective process from which survivors needing medical assistance could receive assistance.

To address the shortcomings of Hurricane Katrina’s response and recovery, Congress passed the Post-Katrina Emergency Reform Act (PKEMRA) of 2006. PKEMRA changed the way FEMA and DHS were organized and structured. FEMA was charged with the singular responsibility for disaster response under DHS. The Act also required staff to be better trained through a vetted qualifications system that elevates and maintains professionalism of its workforce.

PKEMRA directed the FEMA Administrator to develop a National Disaster Recovery Strategy, promoting the use of the most appropriate and cost-effective building materials in any area affected by a major disaster to encourage the construction of disaster-resistant buildings. It also required the development of a National Disaster Housing Strategy.

PKEMRA provisions integrated the military in disaster response; required capacity building using both the public and private sectors; accelerated assistance to state, local, tribal and territorial governments with special emergency declarations; and addressed other challenges identified in the lessons learned following the response and recovery from Hurricane Katrina.

Additionally, PKEMRA mandated greater accessibility by individuals and families to disaster assistance. Access and functional needs must be defined and addressed to ensure access to public information is made available in all languages spoken in the disaster area, and access to evacuation transportation and mass care services accommodates persons with disabilities and socially disadvantaged populations. Following Katrina, hundreds of thousands of pets either perished or were left displaced; PKEMRA requires that pets and their caregivers have access to designated shelters.

Although Hurricane Katrina destroyed much, it led to an improved way to manage disasters and deliver assistance to a wider universe of survivors. PKEMRA remains a driving force of continual change and improvement in emergency response and recovery management as well as professionalization of the field of emergency management.

Social Media as a Tool for Public Safety and Emergency Response Make a Plan: Building A Culture of Disaster Readiness