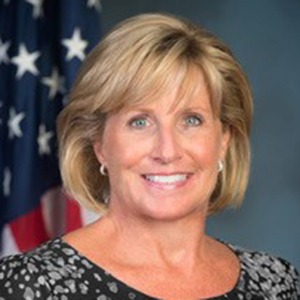 Pamela Hughes Patenaude is an accomplished housing policy, disaster recovery, and real estate expert with a three-decade track record of success as an executive in government, the nonprofit sector, and private industry. Patenaude serves as Senior Executive Advisor at IEM, working directly with the Executive team.

Patenaude is an Independent Director of CoreLogic, Inc. (NYSE:CLGX) and a member of the Audit and Compensation Committees. Patenaude is a member of the Board of Directors for Habitat for Humanity International and also serves on the Board of Directors for the Bipartisan Policy Center. She is a Trustee and Vice Chairman of the Home Builders Institute (HBI), and an Advisory Board Member of the FDIC Advisory Committee on Economic Inclusion. Patenaude is Principal of Granite Housing Strategies, LLC, serving as a strategic advisor for clients engaged in real estate development, affordable housing, and disaster recovery management.

Patenaude served as the Deputy Secretary of the U.S. Department of Housing and Urban Development (HUD). As HUD’s Chief Operating Officer, she managed the day-to-day operations of the $52 billion cabinet level agency with a diverse portfolio of federal housing and community development programs and over 7,000 employees located in sixty-five offices nationwide. During her time at HUD, Patenaude provided oversight for an unprecedented $37 billion in disaster funding for the long-term recovery efforts in Puerto Rico; Texas; Florida; Hawaii; U.S. Virgin Islands; California; North Carolina; and South Carolina.

Prior to rejoining HUD, Patenaude served as the President of the J. Ronald Terwilliger Foundation for Housing America’s Families, a national nonprofit, education and research organization dedicated to illuminating America’s affordable housing crisis. Previously, she was the Director of Housing Policy for the Bipartisan Policy Center, where she successfully led a 21-person commission to present a new direction for national housing policy. Patenaude also served as Executive Vice President of the Urban Land Institute (ULI) and Founding Executive Director of the ULI Terwilliger Center for Housing.

Earlier in her career, Patenaude served as Assistant Secretary for Community Planning and Development at HUD, where she administered more than $8 billion in housing and community development funds. She also played a significant role in the Department’s efforts to rebuild the Gulf Coast region following Hurricanes Katrina and Rita by providing direct oversight of $17 billion in disaster recovery funds. Patenaude also served at HUD as the Assistant Deputy Secretary for Field Policy and Management.

Patenaude earned a Bachelor of Science degree from Saint Anselm College and a Master of Science degree in Community Economic Development from Southern New Hampshire University. Patenaude was the first recipient of the CoreLogic EPIQ Impact Award and was honored as one of Housing Wire magazine’s “2013 Woman of Influence”. She received the Saint Anselm College Alumni Award of Merit in 2006.