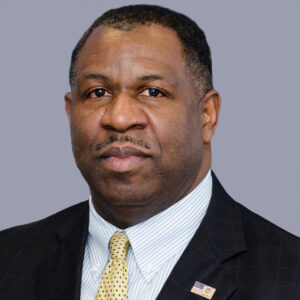 Jerome Hatfield is a senior advisor for IEM’s homeland security and emergency management programs with over three decades of experience in homeland security, emergency management, and law enforcement. In 2013, Hatfield was appointed to serve as Regional Administrator for FEMA Region II, which is one of the largest FEMA regions and has over 500 full-time employees. As Regional Administrator, Hatfield was responsible for coordinating prevention, preparedness, mitigation, response, and recovery programs for the 32 million residents located within New York, New Jersey, Puerto Rico, the U.S. Virgin Islands, and the area’s tribal nations. He led the Hurricane Sandy Recovery effort in New York and New Jersey, offering innovative recovery solutions to maximize and streamline the delivery of federal assistance, and played a pivotal role in the New York/New Jersey Federal Leadership Resilience Collaborative.

Hatfield has been an advocate for resiliency throughout his tenure as Region II Regional Administrator, promoting it as a prevention, preparedness, and mitigation tool. He has also promoted crisis and consequence management to improve risk reduction through integration of law enforcement, public safety, and security professionals in the development of a bi-state safety/security strategy. Hatfield has acted as federal consequence management lead for National Special Security Events, including the Pope Francis visit, Super Bowl XLVIII, and United Nations general assemblies. He also presided as Chair of the Federal Security Committee, which oversees security efforts for the 1,000+ federal tenants at the World Trade Center.

Prior to his position with FEMA at the U.S. Department of Homeland Security, Hatfield served as a member of the New Jersey State Police for 27 years, including as Lieutenant Colonel and Deputy Superintendent of Homeland Security. He commanded Special Operations and the New Jersey Office of Emergency Management and co-chaired the State Emergency Response Commission. Hatfield was the Governor’s Authorized Representative and the State Coordinating Officer for several presidentially declared disasters.

From 2010 to 2012, Hatfield was Commission Chair of the Emergency Management Accreditation Program (EMAP). As chair, he was responsible for conducting nationwide assessments of federal, state, territorial, and local emergency management and homeland security programs. Hatfield has served on FEMA’s National Advisory Council, where he chaired the Response and Recovery Subcommittee. He was also a member of the National Emergency Management Association, serving as Regional Vice President for Region II.

Hatfield currently provides subject matter expertise to the Executive Education Program of the Naval Postgraduate School’s Center for Homeland Defense and Security. He is a Certified Public Manager (CPM) and a veteran of the United States Army.