The Atlantic Sees Another Active and Powerful Hurricane Season 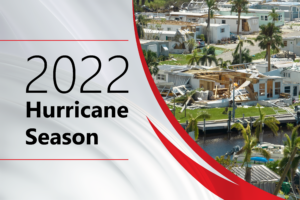 This season was another example of the unexpected yet often powerful nature of storms.

Although this past Atlantic hurricane season was not quite as active as the previous year, it was certainly active and in some cases catastrophic. Weather activity was about average, although the numerous storms still resulted in lives lost and considerable damage.

In May, the National Oceanic and Atmospheric Administration (NOAA) advised of the potential for 14-21 storms with 6-10 becoming hurricanes including 3-6 major hurricanes during the 2022 season.

Unlike recent years, the Atlantic went without notable preseason storm development.  Activity picked up in September near the midpoint of the season, leading to two major hurricanes.

On September 18, Hurricane Fiona struck the southwest coast of Puerto Rico as a Category 1 storm just before intensifying into a Category 4. Fiona caused significant flooding and widespread power outages on the island just two days before the anniversary of Hurricane Maria, a Category 4 storm that hit September 20, 2017.

The next major storm, Hurricane Ian was one of the deadliest to hit Florida after it reached the southwest portion as a Category 4 storm on September 28. The hurricane produced rain and a storm surge that reportedly caused over six feet of flooding in some areas. Ultimately, Ian is responsible for more than 100 lives lost and caused at least $60 billion in damage in the United States.

Most recently, Hurricane Nicole made landfall as a Category 1 storm near Vero Beach, Florida, on November 10. Nicole caused at least two storm-related deaths, several homes collapsed, and extensive power outages were felt across the State. The hurricane was the first late-season storm to hit Florida since 1985.

Although November 30 marks the end of the 2022 Atlantic Hurricane Season, IEM will continue to help communities recover from these storms and looks forward to creating more resilient communities through mitigation and preparation.

If you live in an area that is at risk for hurricanes, we encourage you to reflect on your experience this past season and check out preparedness tips for next year. It is never too early to start your preparedness planning.

If you are able to, please consider helping those who were impacted by recent storms by donating your time or money to reputable organizations.

Remember that staying safe starts with being prepared!