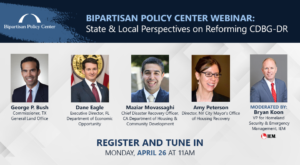 Since its first use in 1993, HUD’s Community Development Block Grant Disaster Recovery program has awarded nearly $90 billion in long-term disaster recovery funding—including almost $40 billion in just the past four years. However, HUD officials, grantees, and other stakeholders have all voiced concerns that these dollars do not flow to communities in crisis quickly, equitably, or impactfully enough. In recent years, Congress has considered, but not passed, legislation to permanently authorize the CDBG-DR program, among other reforms, to speed up the delivery of recovery aid, reduce administrative burdens on HUD and grantees alike, and improve the program’s effectiveness.

BPC’s task force on disaster response reform is hosting a webcast with leaders in managing CDBG-DR grants and disaster recoveries to explore their recent experiences with the program and key policy issues involved in reforming it.