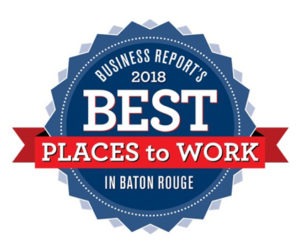 BATON ROUGE, LA, September 26, 2018 – IEM was recently named as one of the 2018 Best Places to Work in Baton Rouge, Louisiana. The awards program is a project of the Greater Baton Rouge Business Report and the Greater Baton Rouge Society for Human Resource Management (SHRM), an affiliate of the SHRM and Best Companies Group. The rankings of the winning companies were released on the morning of September 25th at an awards breakfast at the Crowne Plaza in Baton Rouge.

Competing for the first time in the large businesses category, IEM was ranked 11th in this year’s standings. IEM previously competed in the small/medium business category, ranking in the top ten each year (7th in 2017, 9th in 2016, and 5th in 2015).

This survey and awards program was created to identify, recognize and honor the best places of employment in Baton Rouge. Best places of employment benefit the local economy and workforce. To be considered for participation, companies had to fulfill eligibility requirements that included: have at least 15 employees working in Baton Rouge; be a for-profit or not-for-profit business; be a publicly or privately held business or government entity/municipality; have a facility in Baton Rouge; and be in business a minimum of one year.