Houk Gives Her Whole Heart to the Whole Community

Krista Houk was recently appointed Manager of IEM’s State, Local, and International Preparedness Division. We sat down to discuss the past, present, and future of emergency management, and the path that she took to get to IEM.

Krista Houk did not plan for a career in emergency management. While completing her Master’s in Public Administration at Illinois State University with a focus on community and economic development, the September 11 attacks on the World Trade Centers occurred. Originally planning to join the Peace Corps upon graduation, 9/11 enhanced her desire to give back to the country at a more local level, like many others in our nation. When Houk received an offer to work for the Madison County Emergency Management Agency as the County Director, she returned to her home state of Ohio to mark the beginning of her career as an Emergency Manager.

Houk learned early during her time with Madison County that at its core emergency management is about relationship-building and forming partnerships, particularly with the public, and finding ways to get the community more involved. Houk continues to see community engagement as a core piece of the job. “The whole community and the whole community approach is where my heart lies,” Houk said. Houk also learned that the relationships emergency managers build are one of their most valuable resources, especially at the local and state levels where resources are limited. 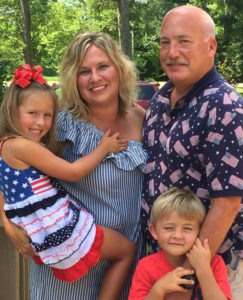 Houk with husband, Bill, and children.

Houk was an early adopter of the Community Emergency Response Team (CERT) and became one of the first emergency management agency directors in Ohio to establish a local CERT program. The leaders of the county CERT, including Houk, trained over 700 community members in emergency preparedness and response. They also ran a train-the-trainer workshop called train-the-trainer to help other counties in Ohio get CERTs up and running. Although the numbers were never officially documented, Houk’s commitment to involving the community in the emergency management process through CERT likely resulted in thousands of locals being trained.

Houk left Ohio once again to serve in a senior emergency planning position for the San Francisco Department of Emergency Management (SFDEM). She found a like-minded colleague and friend in the late Ed Lee, who later became the Mayor of San Francisco. Houk was able to expand Lee’s commitment to building community resiliency by focusing on resiliency planning. They involved community and individual neighborhood advocates, bringing them to the table with city and county departments. The team at SFDEM worked under the understanding that communities that are able to get back and rebuild quickly are the communities that don’t just survive, but thrive, thereby preparing San Francisco for whatever would come next. “We always felt like we [the emergency management department] were an important part of the city,” Houk explained. 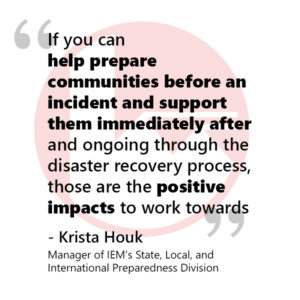 When Houk returned to Ohio, where she still resides today with her husband and twin children, she continued to emphasize the age-old adage that ‘all disasters are local’ in her work. Looking at her career to date, Houk believes that helping individual people has always been the most important part of what emergency managers do, no matter what jurisdictional level you serve. “That is what emergency management is to me—helping communities to develop plans, and to establish relationships and memorandums of understanding—helping folks who have been hurt or impacted in a concrete way. You can’t stop natural disasters from happening but if you can help prepare communities before an incident and support them immediately after and ongoing through the disaster recovery process, those are the positive impacts to work towards.”

When asked what her favorite IEM project to work on has been, Houk reflected on her experience working on a donations management project for San Diego that involved trying to manage how people can better help each other after an incident without making a bad situation worse. The project looked at how to handle, transport, and store commodity donations received, as well as the “when and how” to communicate the community’s donation needs. They found that it is best to include donation information alongside public messaging about the damages that have occurred so that people who want to help know what the impacted community needs most, and how to get it to them (hint: it is generally financial donations, not items, that are most effective in helping a community after a disaster). 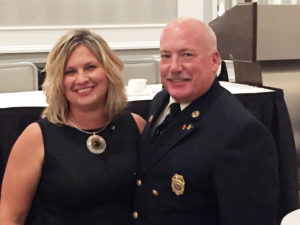 Houk encourages anyone working in emergency management, and particularly those working for small or mid-size agencies that are strapped for resources, to tap into non-traditional, local resources to help fill gaps or to add much-needed services. Look at the surrounding community and build relationships with service-providers that may not normally be seen as common partners in emergency management. “You probably have more resources than you realize,” states Houk.

The State, Local, and International Preparedness Division that Houk now manages specializes in offsetting resource limitations to move the dial on preparedness, regardless of the jurisdiction’s staff size, funding requirements, or the number of hats they are wearing. Houk sees a tremendous opportunity in the work that we at IEM are doing to benefit planning and preparedness in a very real way. “I love that we have the opportunity to truly make a difference with our work in a meaningful way,” Houk shares. “Our clients are part of the team, and our opportunities to impact communities in a positive way are limitless.” 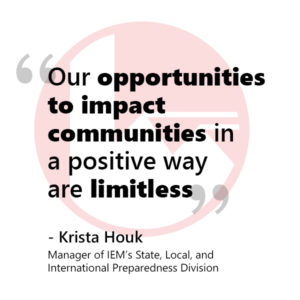 Emergency managers often are working with people who have had the worst, or one of the worst, days that they might ever experience. The work done before that worst day ever happens, putting in place the resources that will be needed, helps communities move past those experiences together, hopefully allowing them to thrive after devastation occurs. “Emergency management is a very interesting field, and we are having a direct, positive impact at the individual level,” Houk concludes.