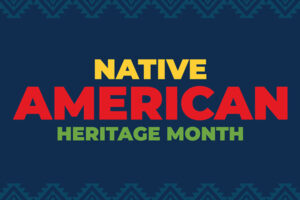 This November, for Native American Heritage Month, we honor the rich history and diverse cultures of American Indians and Alaska Natives across the United States.

The national observance, officially established in 1990 through a joint Congressional resolution and signed by President George H.W. Bush, is the celebration of the legacy and history that Native Americans and their descendants have worked hard for centuries to preserve.

Today and every day, we recognize America’s first peoples and pay homage to their ancestors and their impact in American history.  Although they represent just over 1 percent of the U.S. population, the names and images of American Indians are in everyday culture from local town and water tributaries names to military weapons and advertising.

During National Native American Heritage Month, we celebrate the contributions of American Indians and Alaskan Natives and honor the influence they have had on the advancement of our Nation – past and present.

For example, indigenous people are making strides in emergency management. Recently, Kelbie Kennedy was named the first FEMA National Tribal Affairs Advocate, and the Agency’s first Native American political appointee. Her position comes after the agency released its “National Tribal Strategy” in response to the growing need to help indigenous communities prepare for, respond to, recover from, and mitigate against disasters and other emergencies.

This month, join Team IEM in celebrating the accomplishments of Tribal Nations and help them keep their heritage visible year-round.

Here are a few ways to honor indigenous communities:

The earliest American inhabitants are a diverse group of people. They are Native Americans, Alaska Natives, and other indigenous peoples who each have different lineages and cultures. In fact, today, there are 574 federally recognized Indian tribes in the contiguous 48 states and Alaska. According to the Indigenous Language Institute, more than 300 indigenous languages were spoken in the United States at one point in history and approximately 175 remain today.  Take the time to learn more about their history. Attend Native American Heritage Month cultural events and visit online exhibits throughout the month.

Listen to their stories. Listening and taking a moment to reflect on Native Americans experiences (positive and negative) is an important part of inclusion. Acknowledging America’s indiscretions in history can be a difficult, although necessary, part of making progress.

Celebrate Native American accomplishments. Research the social and intellectual advances the communities have made and consider supporting indigenous economies and businesses. Explore the contributions of Native Americans throughout the month Share those successes, which are commonly absent from history books, entertainment, and the media.

Seek equitable solutions for empowerment. Support laws and organizations that provide resources that contribute to the wellbeing of Native Americans to ensure they live with respect and dignity.

Become ‘Part of the Equity Equation’ in Disability Employment Awareness